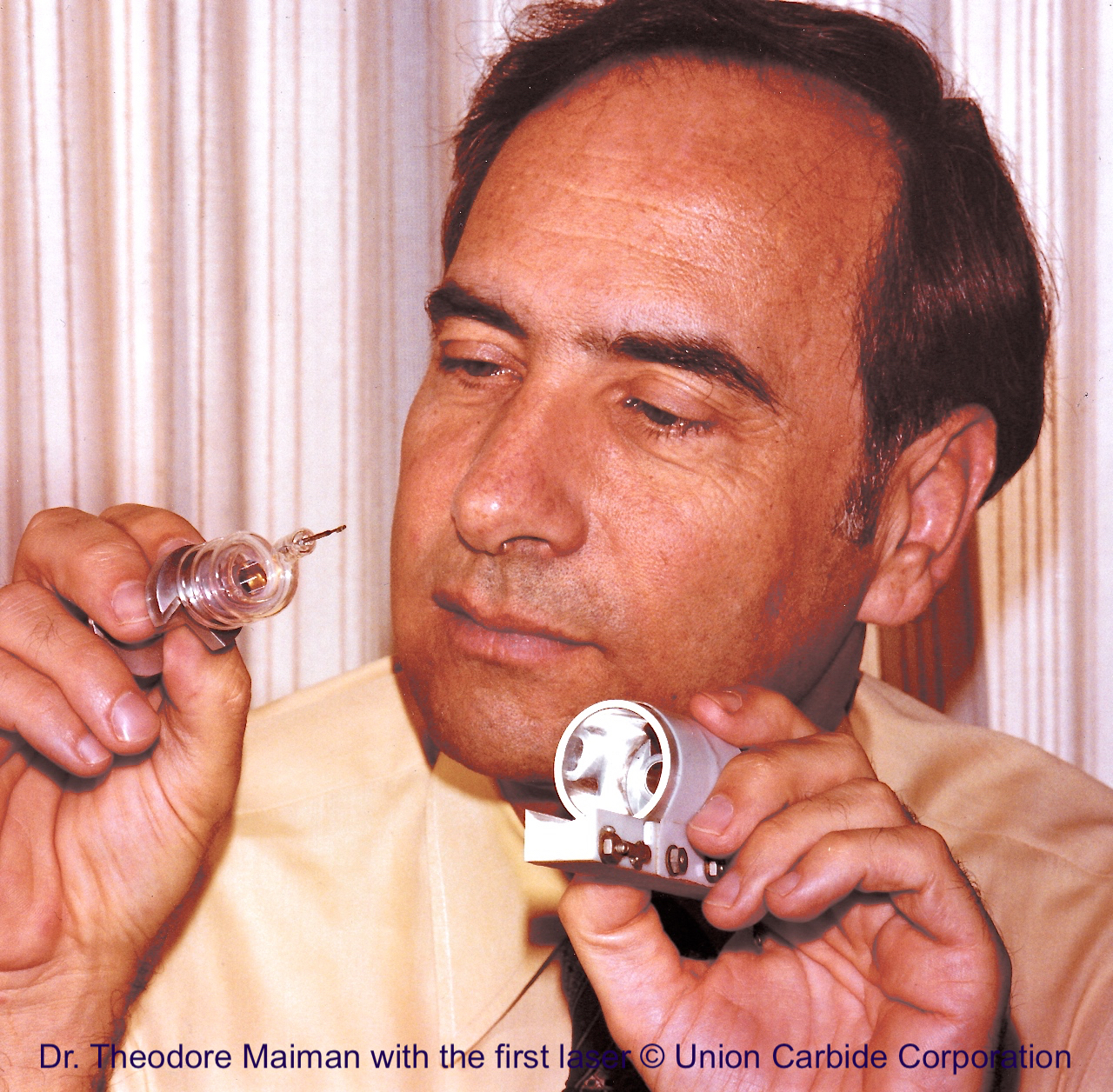 Across six decades, scientists and engineers have transformed the briefest flash of laser light into ultrafast pulses that pack a powerful punch. Rebecca Pool from ESCI talks to Nobel Laureate, Professor Gerard Mourou, to find out more.

When US physicist, Theodore Maiman, observed the first deep red flash of light from the ruby laser he had built, he probably didn’t realise he had just changed the world. It was May 1960, by the end of the year, his set-up would be replicated in many laboratories, and in the coming decades, lasers would be used in telecommunications, materials processing, eye surgery and much more. Maiman’s first, simple and elegant device was based on laser concepts that had been bouncing around in the world of research for quite some time. As early as 1917, Albert Einstein had worked out that electrons within atoms could be excited to emit cascades of photons, in a process known as stimulated emission.

By the 1950s, US-based laser pioneers, Charles Townes from Bell Labs, and Arthur Schawlow, University of Colombia, had developed ‘masers’, devices that are similar to lasers but produce microwaves and radio waves instead of visible light. And come the end of this decade, Schawlow, Townes and other physicists were busy designing optical versions of the maser, soon to be dubbed ‘laser’. But it was Maiman that actually produced the first working laser. Laser is an acronym for “light amplification by stimulated emission of radiation”. To realise this effect, Maiman built a device that comprised a short, ruby rod with one silvered end and a partially silvered end with a small hole.

The rod was placed within a bright, spiral, xenon flash-light, which Maiman used to intensely illuminate and stimulate the ruby’s electrons to emit photons. These photons could then bounce back and forth between the rod’s end-mirrors, exciting more electrons to emit photons, until the photons would escape from the rod as a short, tightly packed burst of coherent laser light. Maiman’s ruby laser emitted deep red pulses of laser light, but soon, laser physicists would be using other solids, as well as gases, liquid dyes, ions, metal vapours and eventually semiconductors to produce pulses and continuous beams of laser light.

By the early 1960s, lasers were already appearing on the commercial market via companies such as Perkin-Elmer and Spectra-Physics. And importantly the devices were already being used to destroy retinal tumours, weld springs to watches and more. The potential for lasers was not lost on the then, up and coming laser physicist, Gerard Mourou, who was studying for his PhD at Paris VI in 1973. As he tells ESCI: “When I started my PhD, my supervisor had just duplicated the Maiman laser in his laboratory. I was so very interested in this… and also very excited by its novel applications,” he adds.

By the early 1970s, laser mode-locking had been invented, making it possible to produce a repetitive stream of intense and short laser pulses. Importantly, these short pulses meant researchers could now study physical and chemical reactions as never before. As Mourou points out: “I wanted to study how atoms, molecules and very small objects moved, so was trying to produce very short pulses from lasers.”

However, laser physics had reached a road block. This development of short, laser pulses had not been accompanied by a large increase in energy per pulse, or peak power. While the tiny, nanojoule pulses from these short-pulsed, mode-locked lasers could be amplified a million times to the millijoule level, any greater amplification destroyed the amplifier and laser components. Researchers could produce higher energy lasers without the damage by increasing the diameter of the laser beam, but such a set-up demanded massive laser installations that only the national research institutes could afford.

But Mourou had a solution: chirped pulse amplification. Working with his student, Donna Strickland, he devised a process to stretch the short laser pulse in time, using a diffraction grating, to reduce its peak power. This less powerful light could then be safely amplified to higher energies without damaging the laser components and then recompressed to its original time-duration with a further grating. The end result was a powerful pulse and no laser damage. By 1985, Mourou and Strickland had produced a breathtakingly short, two picosecond pulse with a relatively modest 1 millijoule of energy. They soon generated an even shorter one picosecond pulse, that at 1 joule, had 1000 times more energy. Chirped pulse amplification was well and truly demonstrated and decades later they would receive the 2018 Nobel prize in Physics for their invention.

Since its development, chirped pulse amplification has become the standard in all high-intensity lasers, and Mourou has used the technique to develop shorter and shorter laser pulses with greater energies and ever-higher peak powers. Ultrashort, intense laser pulses have been created within laboratories worldwide, allowing researchers to take images of split-second processes at the molecular-level, and study inconceivably fast events, including photosynthesis and electron motion in atoms and molecules.

Indeed, physicists from the University of Munich, recently recorded an electron escaping from a helium atom, an event that takes place in a single zeptosecond, or a trillionth of a billionth of a second. “Your camera shutter operates in a millisecond but these short laser pulses are now measured in [at least] one millionth of a billionth of a second,” says Mourou. “With such ultra-high intensity lasers we can study sub-atomic physics, including the nucleus, and I am also very excited about studying the infinitesimally small energy fluctuations in a vacuum.”

But beyond capturing unimaginably fast, atomic and sub-atomic events, the laser’s high intensity has also been harnessed to precisely cut or drill features into a breath-taking array of biological and man-made materials. For example, chirped pulse amplification has long-been used in eye surgery to slice open the lens without damaging surrounding tissue, and also to cauterise blood vessels.

The method is also widely used to etch pits in optical discs, for data storage, machine the cover-glass used in mobile phones, and pattern the surfaces of precision parts for batteries, implants and more.

Indeed, Dr Santiago Miguel Olaizola, from the Centro de Estudios e Investigaciones Técnicas (CEIT) in the Basque Country, Spain, has been exploiting ultrashort pulse lasers to develop processes to define such patterns and textures – known as laser induced periodic surface structures (LIPSS) – in precise locations on surfaces. As a key partner in the European project, Laser4surf, Olaizola, alongside colleagues, intends to develop a system to bring LIPSS to mass production. “Ultrafast laser technology for advanced manufacturing has been maturing very rapidly in the last fifteen years, and has been moving from the laboratory to factories and companies,” he says. “But we would now like to develop and integrate the processes further so we can create these small surface structures very quickly and with ease.”

The ‘all-in-one instrument’ will comprise three key features; an optical module, monitoring unit and software platform. The optical module represents the heart of the system and will control the laser parameters such as laser power, beam profile and wavelength. Meanwhile, the in-line monitoring unit will monitor the properties of the surface patterns as they are created. And the new software platform will allow industrial users to select process parameters according to the material being patterned.

“With the monitoring unit, we will be able to track any unexpected changes to find out if, say, something has happened to the laser,” explains Olaizola. “And the software tools will allow the user to choose, for example, the depth of the surface structures and adjust the instrument to tune the laser parameters for this, without needing to deeply understand the process.”

A prototype is now scheduled for early 2020, and will be used to create LIPSS in advanced batteries, dental implants and the linear encoders that provide position feedback in machine tool and automation systems. “We wanted to demonstrate the system on a combination of different technologies,” highlights Olaizola. “Batteries are in high demand and mass produced, dental implants are an important social application and linear encoders need very precise machining.”

According to Olaizola, the Laser4Surf prototype will initially rely on low energy, ultrashort pulsed lasers that do not use Mourou and Strickland’s chirped pulse amplification. But at a later stage, this will change. “Chirped pulse amplification allows you to have more energy in each laser pulse, which enables faster processing of materials,” he says. “Speed is going to be so important in future LIPSS applications; once mass production has been established we are just going to need to manufacture products faster and faster.”