Lasers have been in use for industry for almost four decades. They offer significant commercial potential for improving surface properties, as they can optimize product performances without altering the chemical composition of the surface or adding any coatings. The ultrashort pulse laser ushered in a new generation of lasers: with durations in the femtosecond range up to a few picoseconds (1 trillion picoseconds = 1 second) they allow any material to be processed at a level of precision that was previously unknown.

During the manufacturing process the ultrashort laser heats its target up to roughly 6,000°C, hotter than the sun’s surface. This happens as much as 800.000 times a second. A system of mirrors guides the beam at lightning speed to the right spot. Since the laser is so fast, the surface doesn’t heat up before the drilling, cutting or structuring is done. With computers that are accurate down to these fractions of seconds, you could engrave an inscription onto the head of a match without setting it on fire. The laser’s target just evaporates.

Laser-induced periodic surface structures (LIPSS) have increasingly gained interest over the past decade. They can be generated in a simple single-step process, allowing a surface to be tailored for optical, mechanical, and chemical surface properties in nano dimensions. The research project Laser4Surf will focus on the development of different technologies to solve the main limitations of laser texturing of metals and reach mass production.

The project partners aim to shorten the process time by developing software combining defined process parameters such as power, speed, specific uses and inline inspection into a single process. 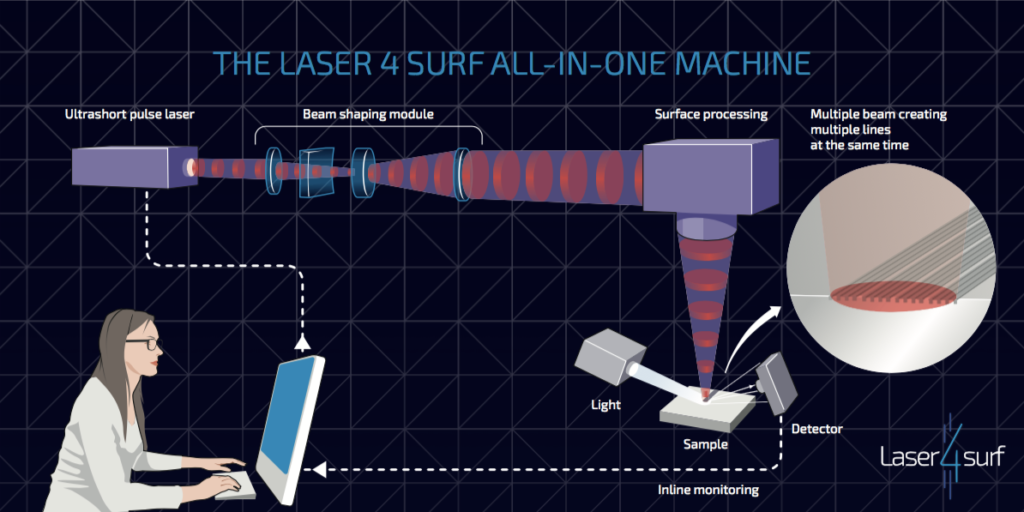 LASER4SURF’s all-in-one machine will overcome the main limitations of laser texturing for mass production. The solution is to merge all independent process steps into one single step: definition of process parameters + functionalisation + in-line inspection.

A new software platform will enable industrial end users to select the process parameters for a desired functionality, without the need to fully understand the LIPSS (Laser Induced Periodic Surface Structures) generation process.

A newly developed optical module will control the optical power, beam profile, polarisation orientation and the operational wavelength of the micromachining system.

An in-line monitoring unit will verify the different nano properties of the surfaces treated. This single-step process in one machine will lead to a significant reduction of the processing time.

This industry prototype is the key result of the Laser4Surf project. It includes an ultrashort-pulse laser, an innovative beam shaping module, a large lasering area to texture periodic surface structures onto large objects and/or large surface areas.

In addition, a monitoring unit uses diffraction methods to analyse the quality of the Laser Induced Periodic Surface Structres (LIPSS). Last but not least, an integrated software has been developed by the consortium to adapt parameters in a user-friendly way.

This presentation represents a functional prototype. The next steps will be to industrialise it, to make it reproduceable and ready for the mass market.
During the Laser4Surf project, several applications were tested with LIPSS to study their optical, mechanical, and chemical surface properties in nano dimensions.